Cooking, Crafting, Dreaming…it's what I do

I’ve already made progress on 2 of my 4 resolutions for the year. I have been baking a lot, so not much has been done in the crafting area. I did get my table moved into the kitchen, and the bar moved into the living-room. I love it! The first night, Sammy (my friend and neighbor) stopped by with her sister, and we sat around the table until after midnight just laughing and joking while the kids hung out in the living-room. The next day, my oldest and dearest friend, who lives in Iowa, stopped by for a visit with her kids. We invited Sammy over again, and we all sat around the table until long after midnight laughing, joking, and reminiscing. Loving it! Plus the bar gives DD more usable space in the living room to organize her art supplies and girlie stuffs…

I went to the Dr.’s on Thursday. It was funny, my Mom had called while I was on my way out, I explained my resolution to her. She was so happy. I went on and on about how I promised to do what ever it is they say, try what ever it is they suggested and so on…Then I got there to find they already diagnosed me, they just failed to mention it. The took X-rays last year (or earlier this year, I forget) and found I have an over-straightening in my neck. What they left out is – it’s caused by arthritis. In fact, I have arthritis in my neck and both shoulders. When it feels like the muscles are shredded – they are (eeewww), and this Dr. went on to explain that what happens then is the blood capillaries burst causing hemorrhaging in the spaces created by the shredding, causing scarring to build up. Which can not be repaired. Damn and eeewwww! He also questioned me on my hobbies, to make sure I’m not doing anything to further damage the area…like gardening. Here’s where part of the promise I made to Mom went out the window –

Him “Oh good, I won’t have to worry about that then.”

Me “I’m sorry, you misunderstand, we don’t have a lawn because it’s all a garden…”

Then I went on to explain that my husband does help a lot with it. I generally sit while weeding, and since I don’t work outside the home, it’s really done in “little bits” every day. Not me going out there for 3-4 hours at a clip bending and raking every week. I also went on to explain that with hubby on the road so much, we’re planning on starting to put in some raised beds to keep it simpler for us both. Our herbs are in pots, and we hope to add more creative container gardening to our lay out as well. He said that’s all good, plus to use the rolling gardening bench  so I can sit better while weeding. Fair enough.

He also mentioned that there is some nerve damage (sensory loss) that he’d like to keep an eye on. Also, that my arches are sagging – to which I informed him that at this stage of the game – pretty much everything is sagging…Such is life. Oh well. I am still going to be following through with it.

Now, I’m going to be looking for ways to design our garden space that will be both more productive, and less labor intensive. Guess our procrastination method of “It’s time, lets throw it all in the ground and see what happens.” is out the window, LOL!

We’re working on saying good-bye to 2010 and welcoming the New Year.  This year, I am setting my goals to be more self-oriented. I can’t control the economy, hubby’s work schedule, or any number of other things that seem to way-lay all my ‘big plans’ for the year. This year, I’m not falling into that trap.

1) No matter what else is going on, I am going to be crafting on a regular basis.

2) To get more put up from our garden harvest, and to keep better records of what we’re harvesting from it. We give so much away each year (which is wonderful, one of the perks of having a garden), but it would be nice to know we can plant less of one thing, to make room for more variety as well.

3) Going to the Dr.’s and sorting this nonsense out with my back. In fact, I made an appointment for tomorrow. I swear, if there’s a phobia about becoming a hypochondriac – I’ve got that! I baked bread yesterday, I’m still in pain from it – crazy.

4) To work on getting the house better organized so that we can all function and still be comfortable.

And that is it for me. Keeping it simple, trying to any way.

To stitch up a sweet little something to give as a gift! Here it is Christmas Eve, I know we all have tons left to do – at least us procrastinators, and those of us waiting for that last pay check to complete the finishing touches – I know, I know! Yet, here I sit – trying to quickly put this out there for you – there is time to make at least one more gift. Specifically this sweet little hat called Olivia’s Butterfly. It’s a free pattern, and it works up very quickly with a small amount of yarn. I even made one using Red Hearts Plush yarn, and my 18yo daughter loves it! I made one in purple for the daughter of my friend and neighbor – (the same one the snowflake scarf was for) – that one I stitched up while DH was in the shower before bed – seriously, this hat takes no time to make. Grab a ball of yarn and bring it with you while you’re standing in line with your last minute shopping, take it to the kitchen with you while you’re grabbing cookies out of the oven every 8-10 minutes, you can get a couple few whipped out in that time alone!

Good luck, and enjoy – I’m off. I’ve got more shopping, and baking to do, plus my Mother is coming today – I’m whipping one of these up for her too – bet it’s done before she gets here! Haha, I love it! 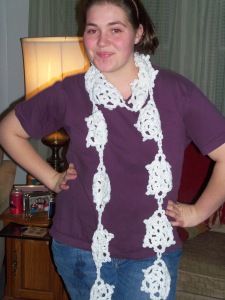 I made this scarf for the daughter of my friend and neighbor. She loves scarves, and already has quite the collection.

There are a few adaptions I’d like to make to the scarf. Which is good, because I never wrote down the pattern as I made the flake motif, and have forgotten how I did it. Basicly, you can take any flake motif that isn’t too lacy and attatch them in a line to make a scarf.

I have also discovered a pattern for gloves that I’ve been playing with. You can find it here at Happy Hookin in Bodines. I’ve made the gloves using the exact pattern twice. They are a bit large in the palm – to which my youngest has decided is great for when wanting to use the palm warmer packets on really cold days. I’m playing around with the pattern now, and so far have made the cuff longer (By starting with a chain of 80, and sl st. the first and last 15 instead of 10) and have taken it down in size a bit by using a sl st. straight through the middle two rows that make the fingers; row 2&3, 7&8, and so on. I sl st. from cuff to cuff, alternating wtih continuing on with the pattern for rows 4&5, and 9&10 to make a more fitted glove. Which I am still playing with. I’ll post pictures later, as the boys have already left for school with them on. I like the changes, but of course have a few more in mind.

I am just so excited to have found a pattern for gloves that is so simple.

This whole “Knotty Witch” thing started with me trying to find the “me” in the grand scheme of that which is my life. I have my own e-mail for it, where I correspond with various crafting e-groups and receive newsletters about topics pertaining to my own personal interests…I forgot the e-mail addy, the pass word, and finally got signed in this morning when Hubby left for work at 3am. (He’s been working out-of-town for the past several months, and is only home on weekends now-and not all of them at that!) While deleting the thousands of e-mails I’ve missed, I came across a notification of a comment to my blog here – while I knew I had a blog, looked for the blog – I could not remember where it is.

How sad is that, any way?

Oh well, I’m back now – and this time I plan to stay back. I have to. Needless to say, we’ve had a serious season of change. One in which I’ve been playing all of my roles in overtime, losing the “just me” part of it all.

Long story short – Had a medical scare with my youngest son. He’s fine though. I did end up leaving my job behind it though. The assistant. Department Manager and I had a disagreement whether I was “entitled” to request days off for his testing and such being I was “just” a part-time worker. Now, in requesting days off – it was more a matter of “Of the 2-3 days off during the work week I will have I’ll need Tues. to be one of them for an appt. in 2 weeks…”

With how all else has turned around, it’s for the best any way.

My sister ended her 15 year-long relationship with her boyfriend. The only great loss there is the 15 years she put in with the sorry SOB, IMHO – of course.  That and she has also lost her home in foreclosure.

What has that got to do with us? Well, she’s here of course, with my youngest nephew.

Needless to say, she has been feeling a bit lost and out of sorts…And it’s taking some time for her to come back into her own as well. I’ve stressed myself about trying to be supportive, without being enabling, firm without being manipulative about her doing something (anything, really!) with her life for herself…

She’s starting to come out of it now though, bit by bit. Now, it’s my turn! I have neglected my own sense of self in tending to everyone else – which is sort of ok, because that is actually the core of my own personal self. My Mother says I am the Matriarch of our family – she says it like it’s because I’m some beacon of stregnth – I am not so sure.

Still, I’ve been missing my time crafting, and posting here. Being inspired by others by their creativity – the expressing the joy of all that we do. Even though, I’ve still been cooking (Sister has gained 20lbs since she’s been here, she needed it.) Still tended the garden, put up what I could, made several pots of sauce – though with nothing to left over to can. With as many people here now, we actually go through a huge stock pot of sauce in a few meals. Plus, I freeze meals for hubby to take on the road with him. That way he can at least have easy lunches while working, and it stretches his per diem pay a bit further.

Oh well. It seems strange to be back. But it’s stranger still to think of starting another blog…I’ll just stick with this one and just go with it.